The College of Medicine Initiates Humanitarian, Educational and Awareness Activities for the Benefit of the Charitable Complex for Orphan Housing in Mosul 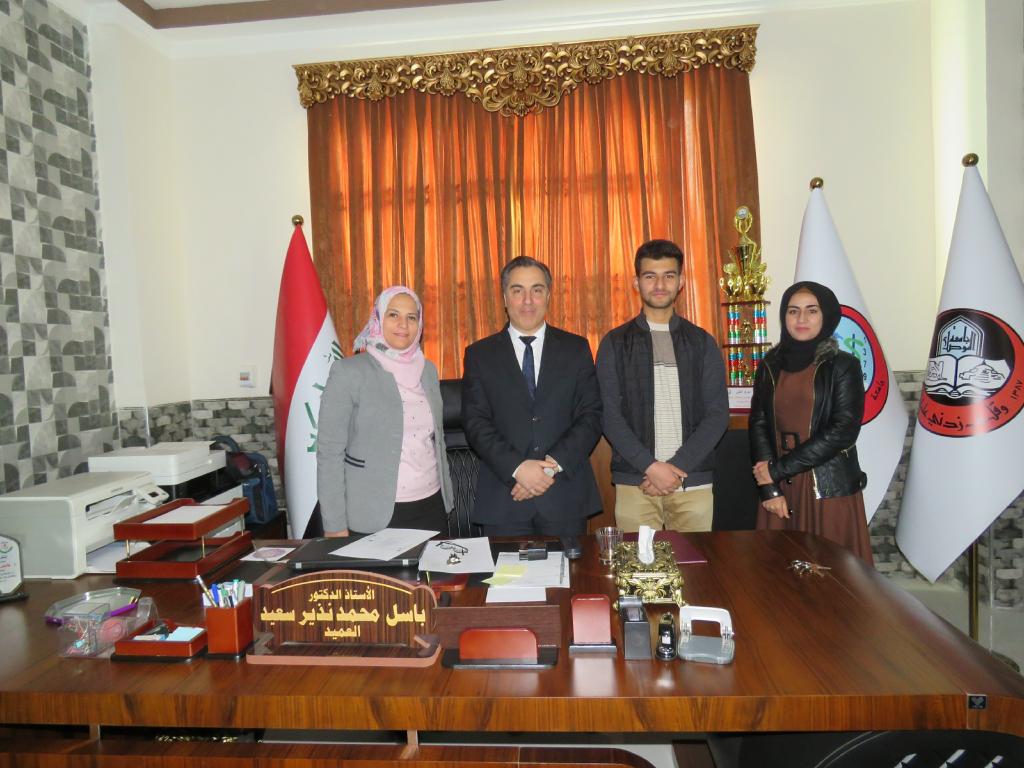 The Charitable Deeds Association in the city of Mosul sent a letter of thanks and appreciation to the Dean of the College of Medicine Prof Dr Basil M. Natheer Saeed on 21 December 2019. Dr Rana M. Rauf, the Official of the Scientific Affairs Division, received it on behalf of the dean. This letter of thanks and appreciation comes as a sympathy for the initiative of a number of the college students (especially the second stage) with humanitarian, educational and awareness activities entitled "Heartbeat Pulse", for the benefit of the Charitable Society for Orphans Housing affiliated with the Charitable Activities Association in Mosul during the period October to December 2019. The campaign included multiple field visits to the aforementioned complex to see the conditions of orphans in the complex and enhance communication with them followed by the distribution of food baskets to the families of the complex. Also, the members of the campaign including students accompanied by the Official of the Scientific Affairs Division, presented educational and awareness items in specific health aspects, and some principles of first aid. The visits also included educational, entertaining and motivational items in order to enhance the cultural and knowledge level of orphaned children, improve their ability to communicate, and express their opinions and dreams. It is worth noting that the campaign was funded through donations from the college students in addition to the teaching staff. 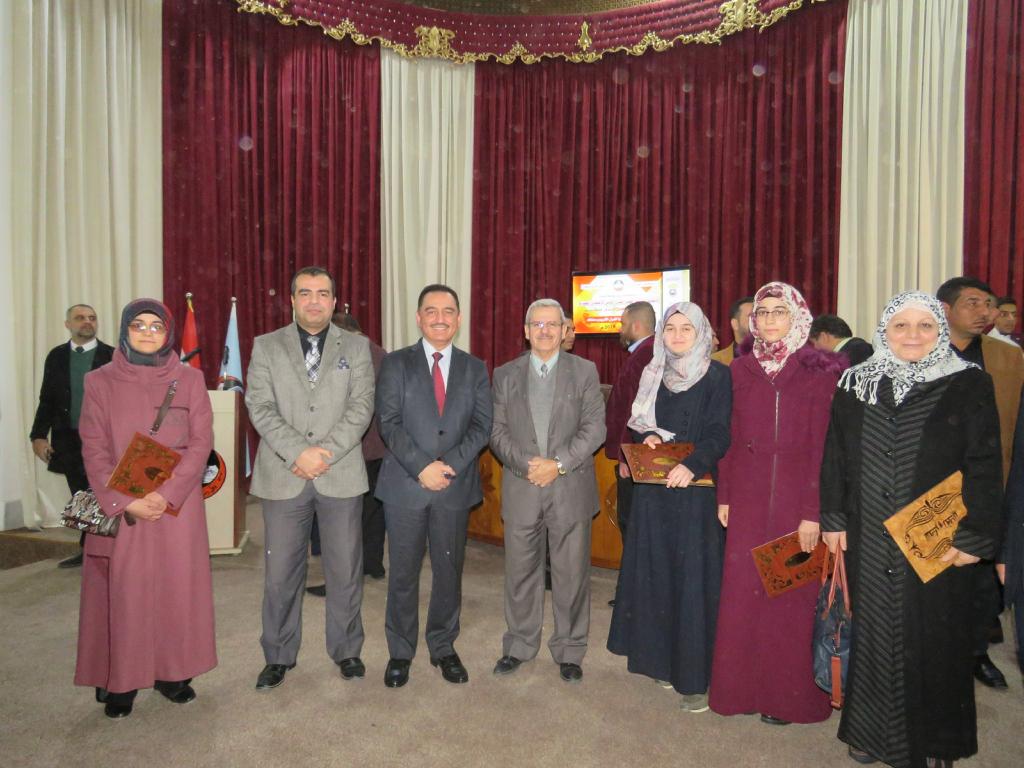 Under the patronage and attendance of the President of University of Mosul, Prof Dr Qusay K.al-Ahmadi, the honouring ceremony for the participants in the seventh competition for reciting and memorizing the Holy Qur’an was held on Thursday, 12 December 2019 in the hall of the Scientific and Literary Forum of the University. The ceremony was attended by the Vice- President of the University for Scientific Affairs, a number of faculties' deans including the Dean of the College of Medicine, Assistant Prof Dr Hazim Kh. al-Allaf, who was accompanied by the Official Responsible for the College of Information Division, Chief Engineer Hassan Y. Abdullah. The ceremony started with a recitation of the Holy Quran with the voice of the first winner in the category of associates of the University, then the speech of the Chairman of the Central Committee of the competition, Prof Dr Abdul Sattar F. Khadr, then recitation of the Holy Quran by the first winner of the recitation in the university students` category. Then the results were announced, the College of Medicine had a good share of the advanced positions in the competition for the associates` and students` categories.  In the category of associates, the Chief Engineer, Muntaha D. Zaidan was ranked the third in the competition of memorising five chapters of Quran. In the students` category, the student Fatima M. Ismail (second stage) ranked the first in the competition of memorizing five chapters, and ranked the third in the recitation competition at the same time. While the student Maymouna A. Shehab (second stage) ranked the first in  memorising ten chapters  , while her colleague Lubna N. Qassem (second stage) also ranked the second in the ten chapters memorizing competition. The Deanship and its Associates bless the above-mentioned ones, wishing them continuous progress.
============================ As part of the preparations before the start of the university championship Futsal and in a friendly meeting, the team of the College of Medicine achieved a good victory by defeating the presidency team ten goals to three on Thursday,  21 November 2019. The game was characterized by competition due to the convergence of levels, but quickly swung the cuff quickly to the team of the College of Medicine to end the events of the first half with five goals for one goal. In the second half, the medical team continued their attacking advantage, scoring five more goals against two. Then the game ends with the result mentioned. Some important players were absent in the team of presidency. At the same time, some important players from the medicine team were also absent such as Dr Mohammad S. Aziz, the accountant Imad Abdukarim. The players Bashar A. Mansour (captain of the team) and Muhannad A. Al-Hubaiti scored four goals each. While rotating Hussein Faisal and Mustafa Ibrahim scoring one goal each. While goalkeeper Hassan Y. Abdullah remained in a safe from the other team, where he was replaced in the second half by Jamal S. Mohammed. He also participated in the victory over Zaki in his first participation with the team. The medical team is one of the pioneer of the university team as it previously reached to the final of last year's championship to get second place among more than twenty teams participated in that championship.

The College of Medicine team (student category) started its participation in the Mosul University Futsal Championship with an overwhelming victory over the team of the College of Pharmacy by nine goals to four on Sunday, 17 th November 2019. With this result, the team of the College of Medicine will meet the team of the College of Arts in an appointment will be determined later on. The tournament system is conducted according to knockout from one game for the first and second rounds only provided that the tournament will be completed from the third round according to the knockout of two games. The preparation and training of the team are supervised by the head of the student activities section Dr Mohammed Kh. Saleh, and the teacher of physical education Mr Ahmed Mutar. Congratulations to the "Doctors of the Future", wishing them success and prosperity in scientific, medical and sports forums together. Commencing Futsal for the Academic Stages of the College of Medicine

The futsal championship (five-ball) championship for the college stages was commenced on Wednesday, 20th October 2019. The opening match resulted in the fourth stage overcoming the sixth stage with eight goals against two. In the second match, which took place on Wednesday, 23th October 2019, the team of the third stage met with the fifth stage, which resulted in the victory of the fifth stage over the third stage with a score of nine goals to three. According to the schedule of the matches and with the above two results, the fourth stage team will meet with the second stage in the third match of the championship. While in the fourth game, the team of the fifth stage will meet with the team of the first stage, after they will regularly attend in the end of October 2019. While in the sixth game, the two losers will meet with each other (the sixth and third), and the loser of them will leave the final championship this time. It is worth mentioning that six teams representing the whole academic stages of the College of Medicine participate in these competitions which are held according to the system of knockout of two games. The presidency of the University of Mosul held a lecture on the evaluation of university performance for teaching staff on Sunday 20 October 2019. The lecture was delivered by Dr Mohammed Kh. Saleh, Head of the Student Activities Section, and in the presence of a number of members of the Student Activities Department at the University of Mosul. It aimed to shed light on the activities through which the teaching staff or employees can gain the grades of his annual assessment. The lecture focused on two main axes: the first included clarifying the types of forms for evaluating performance and the second clarifying how to calculate the scores for all types of forms for evaluation.